Nothing Brings Me Down

After my last video post, and my post over at the other blog, I received a lot of comments, emails, Facebook msgs, etc. Some of you were concerned, some offered advice, others just gave interweb hugs.

So I thought I'd answer you all here.

To clarify, I'm NOT planning to  jump into a relationship anytime soon. I'm going on dates, yes. Nothing serious. Exploring.

And, as most of you suggested, I am taking this time to get to know myself. Just me for the first time in 10 years. Not half of a couple; Not "Kris & 'Boyfriend' ". Cuz honestly... "Kris" is a pretty kickass chick. Who knew?

And as for your concerns about the depression...

I've had depression for as long as I can remember. There are a few ways to keep slightly controlled, but not completely. I suffered from it while in relationships, and so I will single.

The reason it hits me so badly now is because I'm alone.

It's a lot easier to push away the wave of crazy sadness when there's someone beside you, giving support, love and comfort. They help lessen the blow. I don't have that now - That's why I get days like I had Friday.

It won't be the last time.

But I'll deal with it as it comes.

Here is a picture of the Awesometastic Badass Bitch, Miss Daisy the JRT... 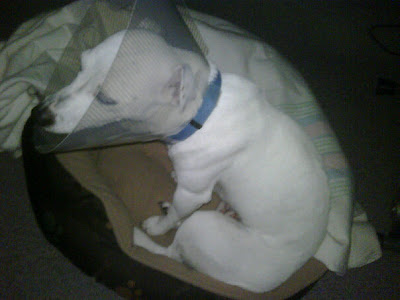 From what you post about, you have a lot of fantastic friends both in person or on the interweb. So I would imagine the loneliness is temporary. Plus you have one helluva cute dog to keep you company and make you giggle. all this sad stuff is just temporary. you said by july right? one a couple weeks away! meanwhile listen to lots of kick ass music.
-anonymust

Heh. At first, I said by June. But that didn't work out. I've changed it to ASAP! And yes... kickass music definitely helps all!

just say you changed it to junly.

Junly it is. And I feel like I should add that most of my friends don't really know or care what's going on with me at any given time. Sad, but true.

Well you're in your 20s right? join the club. I find people in their 20's and well into their 30's do the whole 'yea I'm totally going to be there..' or the 'yea we should definitely get together' but then you're the one who has to initiate any plans or conversation. or there's the one sided convos. hopefully by our mid 30's we learn a bit of empathy and understanding - on a regular basis. JMHO. im sure your friends are great though. just lacking some empathy maybe sometimes.
-anonymust

p.s. http://www.youtube.com/watch?v=ABbe33fMrkM
as you know, Rice is cathartic. the artist, not the food.

"Cuz honestly... "Kris" is a pretty kickass chick. Who knew?"

"And I feel like I should add that most of my friends don't really know or care what's going on with me at any given time. Sad, but true."

- I really hope I'm not included in that!

No!! You are not included in that. You know and care. and you're family, too.

How is Daisy doing?

She's alright. Super restless, because she isn't allowed to go for a walk, or play outside for 10 days.

Yep. But I seem to get less excited about scene every year.

I think I disagree with everyone else.

If you want to be in a relationship, have one. If you have someone in mind, get him. Just because you like to have a special person at your side does not make you silly. You are human and seem to have a high capacity for love. Why waste that? It's a gift!

In the end, whatever we all say doesn't really matter. We can't change how you feel. Neither can you. Always do what feels right to YOU. Make yourself happy however you can.

Yeah... I listen to everyone's advice, most of it is pretty darn good. But I suppose no matter what I'll still end up doing what I do. Which right now? Is nothing.

They should make cones for people; that would be a cool fashion trend. Maybe I'll start it.

Anyway I have complete faith that you will conquer and rule your world. I'm reminded of this great ad I saw once that went: "Why travel half way around the world to find yourself? You could be just around the corner."

I think it was an ad for some sort of church in England, but still, I've always liked that line.

Apparently I'm not missing, just busy, where'd I put those winning lottery numbers. I know they're around here somewhere.

andrew - I dunno... but when ya find em - remember your good ol' blogfriend Kris! ;)

Born with a big mouth! said...

luv to ya :) and you are never actually totally alone. cause i am here.