Operatic By Voice, A Fanatic By Choice

With a new season of Californication starting up again, I'm reminded of a slight affliction that some men seem to have caught since the show began.

I call it the Hank Moody Syndrome. HMS for short, cuz that's how I roll.

For those who have never watched Californication, allow me to explain (and for those who are avid viewers like myself, just hold tight). 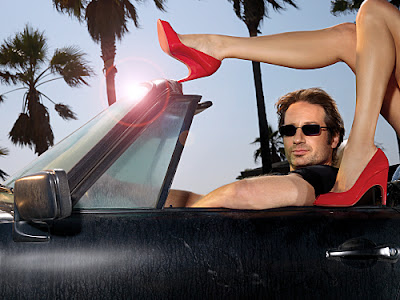 Wiki-wiki-pedia says: Moody is an erratic but esteemed writer who frequently becomes embroiled in bizarre and in some cases scandalous situations. To put it simply? He's a charming, somehow loveable writer who screws a lot of random women and is really good at getting into crazy shit. All the while, his daughter and on-again off-again, on-again off-again girly, the "love of his life" as it were, get caught in his shenanigans and are effed up by 'em. (See Mom? I said "effed". I'm growed up.)

So, back to HMS - Hank Moody Syndrome.

More than a few guys have told me that they see themselves as real life Hank Moodys. Deep, misunderstood, judged harshly, yet with a heart of gold somewhere under that arrogant & self-obsessed persona.

For some (not all) guys that consider themselves just like ol' Hanky -  it's their excuse for being an asshole, wannabe slut, or user. It's also pretty indicative of a crapload of conceit.

Think about it, boys 'n girls.

Comparing yourself to a fictional TV character who is known for getting any and every chick he meets into bed, using his charm and looks to get out of the trouble he causes, and playing the role of "intelligent badass with feelings"? Your ego is making you delusional (save for a few. I stress that again).


"I didn't mean to hurt you. I'm just misunderstood. I'm like Hank Moody."
'Scuse me mister, your HMS is showing.

So guys, take my advice - don't tell girls you're interested in that you're like Hank Moody. Because while we may love the guy on TV, we don't want a real-life one who will inevitably mess us up. You may just as well call yourself a different fictional character, and leave it at that:

I am also an avid Californication viewer. But what if you cannot even consider those negatives in HM's life as a possibility but would like the girl to focus on the positives and he has a lot. Because really, aren't we all esteemed witer's that become embroiled in bizarre situations sometmes?

I don't disagree. I dig Hank, and sure... everyone will have some kind of parallels with the character. But, say you were a woman - would you want to be the Karen to someone's Hank? Or any of the others who end up hating him?

My point is just that a lot of the men who consider themselves to be just like this character are using it as an excuse to screw up.

Hank's positives are awesome. If that's what a guy saw in himself, that would be a-ok.

I'll be Quagmire. Hank Moody is a douche bag.

It always pained me that Californication was on at the same time as Deadliest Warrior. I'd have to continually switch back and forth. Couldn't they combine the two shows? Because if there's one thing guys like, it's weapons and boobs.

I always wanted to be a Fembot, so I could have boobs AS weapons.

ugh, in my opinion it's time to run anytime a man gives even the slightest indication he's modeled himself after ANY fictional character or ANY famous person. Cue the unhinged, insecure, crazytown, mommy issue, daddy issue floodgates!

He IS a fictional character.
The writer added the "positives".

In real life, a$$holes are a$$holes and bit©hes are bit©hes.

Look for the nice guys/girls who treat you right and think they are lucky to be with you.

Sometimes assholes are bitches and bitches are assholes.

But he also voices dog food commercials, so who knows what's real anymore.

Hiya Hank. I wrote a blog post about yooooouuuuu. Wanna come over?

I understand the draw of the show. It's funny, and I've watched it a few times, but something about it really bugs me. Maybe it's the type of man Moody is, and the message it sends to ass holes that they do their damage and remain mostly unhurt by it all.

I'm either depressed or am simply getting old (probably both) but I'm not even interested in this stuff anymore...

Anyhow ... I believe, one's freedom (whatever it entails, even how one chooses to behave) stops where it starts to hurt others.
I try to live by this 'motto' as much as I can but sadly I'm only human and am guilty as charged.

Anon - You're not the first person to say that, this discussion has come up with a few people that share that same feeling.

Harald - Everyone makes mistakes! This guy is a character on TV, so his mistakes are for entertainment. My mistakes rarely entertain me ;)

He lives his life just like you, except he's more likeable. :)

Sorry, I didnt clarify my comments .... I meant that he bangs a 19 year old in the Season Four premiere (thats how old the actress is) ....

I have never seen the show. I hear good things though. But if I may take a lesson from another show Blue Mountain State. I would rather hang out with this Hank Moody rather than be him. Just bro down and get his cast offs or as it is put by the backup QB in BMS, trickle down banging. somehow I think thats just as sleazy but comes off as not.

Jonny - Yes, right... you are correct about the premiere. And you're not offended - you don't get offended. Kisses and love, jerkface.

Vincent - Yeah, pretty sure it's just as sleazy. It definitely comes off as that. Especially if you call it "trickle down banging". And OH, the STDs you'll get! ;)

ha ha yes for some reason STDs dont seem to be a problem for the QB. Oh the TV life how simple and easy and nothing like real life at all.

I really can't watch the show. I find it so frustrating that at every corner, Hank has a choice and inevitably makes the worst one. It frustrates me that his character has become so one-dimensional, such a parody of what he could be. If he could actually redeem himself in some altruistic or at least foresighted act, perhaps I could tune back in.

I think that's why some people watch (other than for the naked chicks)... in hopes that he'll somehow redeem himself. But I guess that'd end the whole show.

A morning of awkwardness is far better than a night of loneliness.

Good thing you've got a constant case of crabs to keep you company.

Another Hank Moody here to say hi... I use the moniker for blogging because I like the character's no-nonsense persona on on what he thinks. Have I been in some messed up situations like our Californication protagonist? You bet... but as you rightly pointed out, the "real" Hank is an entertainment personality, and of course, if all his situations affected him, there wouldn't be much of a show. From someone in real life who has been in real life messed up situations, I can certainly attest to my actions causing definite effects. Have I learned from them? You bet. People who use Hank as an excuse for acting a certain way are losers. We can certainly identify with him, but what separates us from that character is actually growing and moving forward positively from our errors!

Have read a few entries of your blog... have enjoyed them! Please come and check out mine... I'm in the process of rebooting it. Have a great night!

I think it's important to remember that when guys (myself being one of them) tell you those things, they are more identifying with some of the things they see in a particular character, in this case Hank Moody.

For my part, the parts of this character I most felt in tune with were not admirable or cool, they were sad. I see neither conceit or narcissism is admitting you have problems you have to work out in order to be a better person.

Perhaps accepting that this is all it really is is something to be considered.

If you are who I think you are, JLP... a lot of yours came from conceit. Maybe reasons changed, but that's what it was. A life without consequence doesn't exist, I'm afraid.