And Balanced On The Biggest Wave, You Race Toward An Early Grave

Behold! My guide to going to shows where you don't know much about the bands you're seeing: 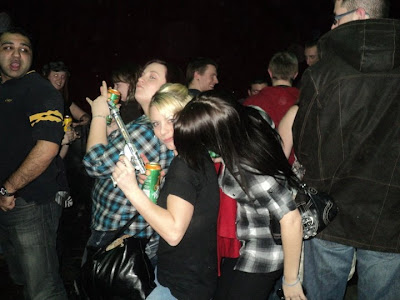 1. Go with fans of said bands, because their excitement and fan-icity will be contagious. Also pick people who allow you to bite them in photos, and hope that they have the ability to steal weaponry from Darth Vader's Sith-y security. Don't ask, just trust me. 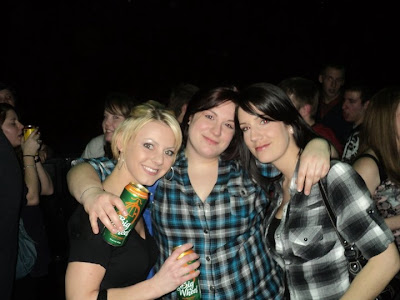 2. Take one normal photo, if for no other reason than to prove that you're capable of it. 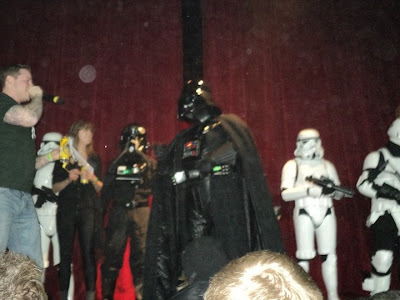 3. Use the force, Luke. Maybe I made out with Darth Vader, maybe I didn't. Maybe his light sabre is bigger than it looks in the movies. ...maybe it isn't. 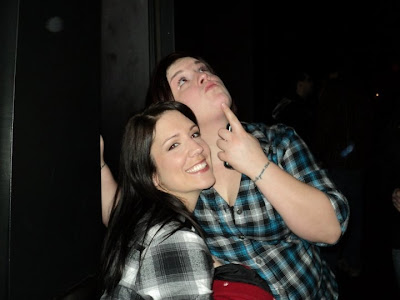 4. Smile. God loves you. Y'know, if God is that guy who hangs out at the corner, yelling about the impending apocalypse and telling you that you're beautiful before he asks you for change and spits in his hand. Cuz that guy's totally sweet on you. 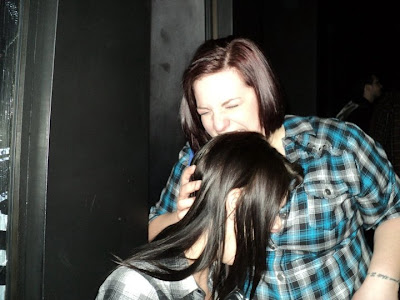 5. Eat before the show. Because if you get hungry during, I won't always allow you to use me as a snack (But buy me a beer, and we'll talk about it...) 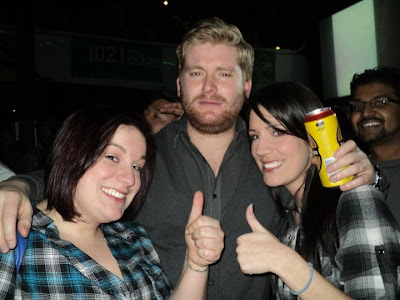 6. When you see someone wearing an article of clothing that you just happen to have made up a word for - give 'em credit. In this case? He's wearing a Dandy Mandigan. A cardigan for a man that just happens to be dandy. Dandy Mandigan. 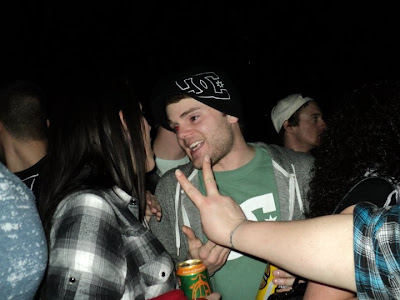 7. When you inevitably make friends with every single person you see, it is always a good idea to remember people's names by associating songs with them. If no song exists, make it up. In this case? Meet Jeremy. He spoke in class today. Eddie Vedder said so. 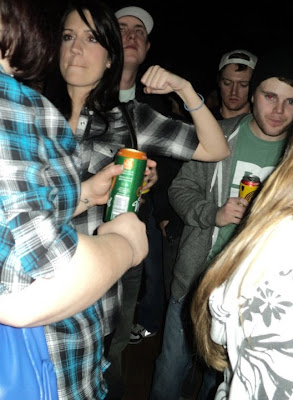 8. Use your friend to practice punching so you're fully prepared when the gropers come along. The gropers will always come along. But you'll be ready - and if punching doesn't work, a swift kick to the groin is always effective. 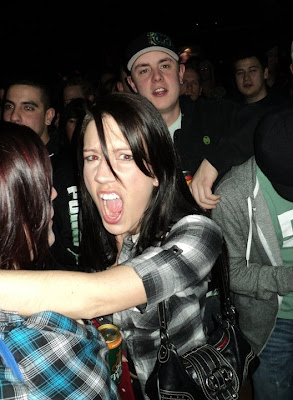 9. Make this face and scream a lot. That way all those crazy young folks around you will just assume that you belong. Your awesomeness will radiate with this face... that, or people will be frightened and stop groping you. Win win. 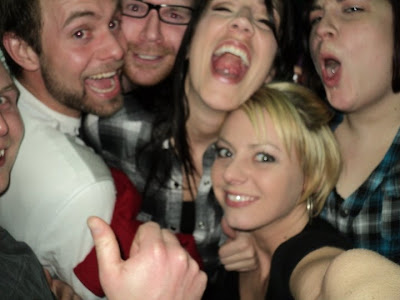 10. Everyone will likely end up talking to you. Be nice to them, they have feelings too. Except Darth Vader. He's an emotionless asshat. But that's another story....

Enjoy the show, whoever the crap they are.
Throat-punched by Kris at 12:08 PM

I'll definitely be implimenting this in the future; I get dragged to lots of shows.

He was Luke's father.

God tips to live by.

Is it ok if I start calling you Left-Hook Goetz? POW Squared!

Alyson - Well, Darth & I had a moment... but then I think he used his Sith-y powers to read my mind and found out that I just wanted to steal his sabre. Needless to say, it didn't work out.

Mindy - This is true. And I'm Luke's mother.

Keith - I approve of that nickname. It's full of POW!

Vader turns ya on, does he?

no! More like hot brunette bloggirls who make me laugh.

I believe step #5 is partake in Plaid On Plaid Motorboat. (wicked band name)

I was at that show. Almost drank Jager out of Storm Trooper #2's cod piece.

Jetson - My friend took one of their guns. You were there? Must mean that your the only stranger I didn't make friends with that night.... or DID I?

Jetson is a miasma. But for the stench, you would not know if you met him.

Kris thinks 1998 was a good year for some things. She isn't sure what at this time, but surely it'll come to her.

I was there too! I saw you near the bar during Ko but was too shy to say that I knew who you were. I swear you did that dance from seinfeld too, you looked fun. I should have said hi I guess.

Hahahaha... Jesus. Yes, yes I did the Elaine dance a few times. There was a reason for it. I swear. I hoped no one (other than the people I was talking to) would notice.

Whats up! I just wish to give a huge thumbs up for the
good data you have right here on this post.
I will likely be coming again to your blog for more soon.


Here is my webpage; SEO收費

Hiya! I just wish to give a huge thumbs up for the good
info you’ve gotten right here on this post. I can be coming back to your blog for more soon.

I will likely be coming again to your weblog for extra soon.


Here is my blog - download seo in guk bad 4shared