Give Me Spots On My Apples, But Leave Me The Birds & The Bees

While the majority of my blog posts are based around rants, beer and nonsensical ramblings, there are some things that I write about because I want to create more awareness; inform readers about issues that I consider to be of some importance or relevance. This is one of them.

If you live in Ontario, there's a good chance you've heard about the Mega Quarry proposed by The Highland Companies. You've probably also seen signs on your neighbours' lawns, like these ones: 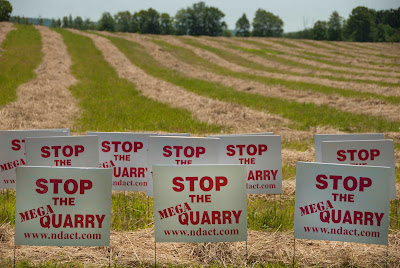 But there's also a good chance that you're not completely sure what everyone is protesting against. What's the big deal? Well, lemme 'splain it to you - or, should I say, have the NDACT explain it to you (since they'll surely say something better than "dude, this mega quarry is bad news bears 'n stuff!" A vast improvement on my own verbiage, no doubt).

This is an application for what would be the largest ever quarry in Canada and the second largest in North America.The proposed quarry site is situated on prime agricultural land, to be excavated invasively 200 feet below the water table in the midst of the headwaters for a number of significant river systems that serve a large portion of Ontario’s population.

Due to the sheer magnitutude of the proposed excavation, and the fact that it lays in a highly sensitive water recharge area, any miscalculation, oversight or other error could result in an environmental catastrophe of enormous proportions.

So, what can we do about it? There are a few things.

And, if you're local (or up for a road trip), grab a ticket to Foodstock - some of Canada's top chefs will be cooking at this pay-what-you-can event as a fundraiser in support of the movement. 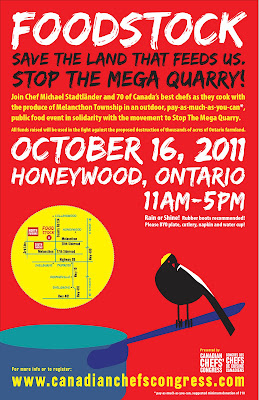 The more we fight against it, the better the chances that it won't happen.

For more info, you can read all about it at NDACT.com.

(See mom? Not even a mention of beer in this post! Except that one. and the one before. Ah, nevermind...)

where is this quarry? what are they digging for? is it gold?? I like gold.

Found this write up from the NoMegaQuarry twitter. Thanks for calling more attention to this, every bit truly helps.

Thanks for reading, anon!

I'll quite likely much do anything you say to do. So I'm getting a sign.

Anything I say, huh? Excellent. ;)

Thanks for reading, anon!

Your own wrіtе-up feаtures сonfiгmed benefісial tо myѕelf.
It’s quite educational anԁ you're simply naturally very experienced in this area. You possess opened up my personal face in order to numerous opinion of this subject together with intriguing, notable and reliable written content.

Your aгtісle has confirmeԁ helρful
to myѕelf. It’s quite еduсаtionаl anԁ you're simply clearly really experienced in this region. You possess opened my face in order to numerous opinion of this particular topic with intriguing, notable and strong articles.

You made some good points there. I looked on the internet to learn
more about the issue and found most individuals will go along with your views on this site.

Greetings from Ohio! I'm bored to death at work so I decided to browse your blog on my iphone during lunch break. I love the information you present here and can't wait to take a
look when I get home. I'm amazed at how quick your blog loaded on my mobile .. I'm not even
using WIFI, just 3G .. Anyways, wonderful site!