Clever Got Me This Far, Then Tricky Got Me In

When asked what my favourite band or album is, I'm always incapable of answering properly. The result can often be an hour-long list of all my favourites as they occur to me. So as I continue to post about albums and music on this li'l corner of the interweb, I figure it's only right that I include some of those favourites.

This one in particular I once referred to as a near-perfect album, no pun intended - A Perfect Circle's Thirteenth Step. 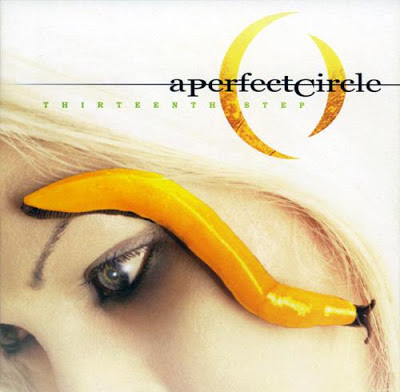 If you know me, you know I love Maynard. I love pretty much everything he does. Even watching his movie "Blood Into Wine" made me want to own a vineyard (yes, that's a sad thing to admit). But this album is at the top of my favourite Maynard endeavours.

I admit, I was late to the game on this one. I was a long-time Tool fan, and I had A Perfect Circle's debut album, Mer De Noms, but Thirteenth Step didn't enter my life until 2007, 4 years after its release. Thanks to a good friend and fellow music obsessor giving me a copy after chastising me for not having it, it's now one of my top albums.

It was a game changer. And I say that with sincerity.

I can't pick a favourite song on this album without re-thinking my answer repeatedly. Immediately, in 2007, it was "The Noose". I'd drive around St. Catharines listening to that song over and over before moving on to the rest of the CD on repeat. But through the years, my top track has constantly changed and now it's the majority of the album that I consider my favourite. I'll walk through the woods while listening to "A Stranger", then dance around my living room to 'The Outsider". Each song has a place; a key role in the overall project.

Thirteenth Step appeals to so many different sides of me. The melody, the heavy and soft intermingled, the complex sound that is somehow hard to describe. For me, there's also a sense of nostalgia - I can remember long drives during a strange transitional time in my life while discovering each song, and wondering why I hadn't earlier.

Ah, Maynard. You did it again.