Your Ears Should Be Burning

I've been pretty vocal about wanting to move, whether just apartments or changing cities, and some people have asked why I'm dead-set against staying right where I am.


Truth be told, I love my neighbourhood. Every day I appreciate it more and more. And my apartment itself? Though this house is falling apart due to lack of maintenance, my unit was renovated and I like it well enough (mouse visitors notwithstanding). I can't really complain about two balconies, hardwood floors and a great location.

So other than the mice (due to proximity to High Park) and the rest of the house issues, here is an example of why I really want to move:

I was walking up my street the other day, heading to the grocery store. A car drove up beside me and stopped. The guy driving said "Hey baby, I just wanted to sincerely thank you for looking damn good today. You're looking real good, and just I want you to know that." He leered in such a way I thought I was gonna throw up or throw a punch to his throat.

Upon immediate recognition of this guy, I was dumbfounded. My reply: "Excuse me? You know that I'm your neighbour, right?"

Him - "No, I did not know that. But girl I hope you have a great day, lookin' that damn good, honey. Thanks for lookin' so beautiful for me." He made some gross noises and then drove off as I tried to set his head on fire with my eyes.

This guy lives in the apartment beside mine. He's the dude who talks so loud I can hear every conversation, ensures that the house constantly smells like an outdoor concert, and brings seriously... we'll call them "unsavoury"... people to the place at all hours. He has always given me the creeps, and now he's just approached me as some would a hooker. I am not comfortable with that. I shouldn't have to be. 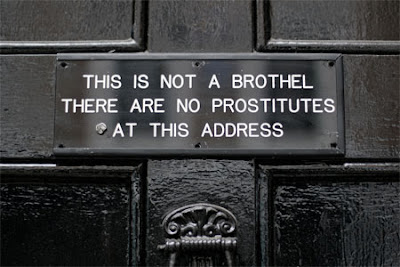 But that's not the only reason, and he's not the only one. There is another man who lives here, and he is supposed to be the property manager. I use that term loosely, but my landlord gave him the title. He is constantly being far too forward with me and extremely inappropriate. He has asked me to join his "team" of women he sleeps with, asked how he can get me (and said that he asks God every night), commented on parts of my body, etc. He once told me that he restrained himself due to respect for me and my boyfriend. I will not ever let him know that I'm now single, because I can't imagine how he would treat me then. This man has a key to my place. When something is broken, I often don't report it because I don't want him alone with me in my home.

These are both grown men, far older than I am. Somehow that makes it worse.

It's at the point where I run into my apartment as fast as possible and lock all the locks, to avoid any confrontation with any of them. And that's why I want to leave.

So I'm left with a conundrum. Do I move out of this apartment and just find another one in the (expensive) neighbourhood that I love so much? Or do I change cities? When I wasn't single, I planned on moving to a small town at some point, so the idea of making a big location change is not so foreign to me. The benefits of leaving Toronto would mean I could live cheaper and save for a car again. And maybe a fresh start wouldn't be so bad.

This is where you guys come in. I know some of you are from St. Catharines, Hamilton, Guelph, Burlington, and everywhere in between. Those are some of the places I've been considering, and I'd love your input. Do I stick to Toronto, or find a new location?


Which cities/towns would you recommend that a chick like me and her little dog should live?

Email ThisBlogThis!Share to TwitterShare to FacebookShare to Pinterest
Labels: Personal, rants and randoms

You should go wherever you dreamed of being be it the beaches or Paris. :)

You shouldn't be made to feel like you have to leave a city you love just because of a few sleazebags. Appalling. I'd apologize on behalf of the better part of the male gender, but that isn't very helpful, nor does it change anything.

I would say stay, just find another place elsewhere in the city. But in the end, you should follow your heart and do what feels right to you.

Come back to St Catharines :-)

Is it toronto you are sick of, of just the pervs who live in your building? Smaller town or suburban might be quiet, cheaper, but definitely more boring. You will likely need a car to get around in the suburbs.

These guys soundseriously sketchy. I need to tell your landlord that the property manager and other tenants are pervs. Also you need a male friend to threaten these guys.

This post makes me angry – you should definitely move out of
that situation ASAP.

Seems to me the question is: If you could live in
Toronto/your neighborhood without ignorant assholes beside you, would you want
to? Or in other words, do you hate the city or just your douchebag neighbors? That
determines where you look for a place.

NOTL or somewhere in Toronto closer to ossington!

So many options! And thanks. :)

Ha! It's possible. I'm keeping an eye out for apartments there and a few other cities.

I have a love/hate relationship with Toronto. Boring doesn't bother me that much, anymore. If I moved, I'd probably visit a lot. (And either way, I still want a car again.)


Male friend is a good idea. Telling the landlord.... a bit more of a difficult situation.

A big part of me wants to stay in this 'hood, and just ditch the house. But part of me also wants to change cities.

Ya wanna be neighbours?

Hmm that's completely lame you're going through that. Would you consider switching provinces? I hear Quebec and in particular Montreal is pretty awesome! And apparently they do beer better then here in Toronto.

Also it's crazy, for every 'good guy' there's like '5 bad ones' ruining the jazz for the rest of us!

I live near high park and LOVE it. The apartment building I live in is great and the community is super. Yesterday we had a community bbq. Although if you feel unsafe it is best to move. I loved Kingston. Its beautiful there.
I actually moved to London, England for two years. MAybe you can try doing that?

...yes. Actually, the thing I really liked about it was the kind of old style main street with all the shops on it. And the greenery. I must visit one day, for the day.