Through my years, people have often asked me where I got my taste in music. Growing up, my friends didn't listen to the same things I did (like that boy I once mentioned whose mother told him I listened to the Devil's music), so where did it come from?

I often credit my sister with my musical tastes, especially due to the awesome mixed tapes she used to make me that were, and still are, among my favourite playlists ever. But even before the mixed tapes, there were trips up north. 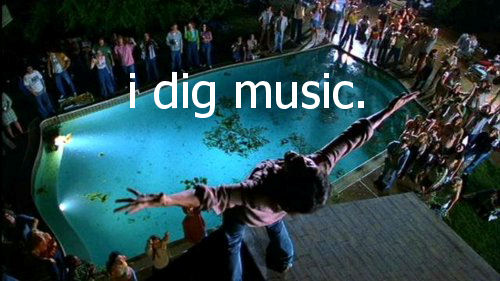 Weeks at the cottage meant (along wish fishing, swimming, etc) sitting around a campfire while my dad played his guitar and we did our best to sing along. For many years, I knew certain songs strictly from my dad playing them up north. Years later, when I finally heard the actual versions, it was pretty funny. We realized that my dad is a bit tone-deaf, so the songs as we we knew them were slightly off, and for sentimental reasons I kinda prefer them that way.

But I digress. The songs he'd play around the fire, the tapes we'd listen to on the ride up & during our poker games, they all became some of my favourite music. Even the bands I don't necessarily listen to much now still take me right back to my favourite weeks up north.

We haven't had a week at the cottage for a few years, but this Saturday, the day after my 30th birthday, that changes. And as my sister, brother-in-law and I have been putting together an Rdio playlist for the trip, I'm taken back to the old campfires and up north mix tapes that I love so much.

These trips, and therefore my dad, are what started my love for what I've now listened to all my life... The Doors, Fleetwood Mac, Zeppelin, Hendrix, Van Morrison, and a slew of classic rock that became some of my favourite bands.

That's where it all started. That's what became a lifelong music obsession.

It's amazing how our musical tastes are formed. My parents alarm clock would play the music of a popular radio station of that time and I am addicted to songs of that time period.
It's comfort.

Songs just like the ones you have listed above... OH, and most notably: http://www.youtube.com/watch?v=HTzGMEfbnAw (Angel of Morning - Juice Newton) lol

We'll have to thank our parents for having better taste in music than some others. :)