And In A Wide Sea Of Eyes, I See One Pair That I Recognize

I know I post pretty much the exact same thing every year, but that's only because my pigdog is awesome.


5 years ago today, I got her (in what I now refer to as "The Great Crackhouse Rescue of '08"). That's 5 years of this little chick being my partner in crime.

I may not know for sure how old she is, or when her actual birthday is - but I do know that my Piggie Smalls deserves her day. She's the best, after all.

The other night, as I sat watching Pearl Jam Twenty yet again, Masuka sent me a text that delivered his intended effect - it got me riled up and ready for a music debate.

He knows me so well.

This is his first message (in yellow, of course): 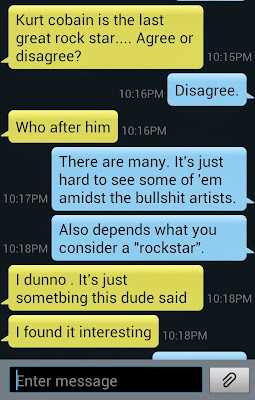 He had been watching a Kurt Cobain documentary while I'd been watching my Pearl Jam / early 90's grunge doc. So we both had our minds on music, rockstars & legends. Just very different trains of thought.

I won't post our debate here, but I thought it would be worth a mention -  I want to know what the general consensus is.

I realize that hardcore Kurt Cobain fans do feel that he is the last rockstar, but I will always disagree. I mentioned that the timing of his death, in the middle of his success, has a lot to do with how those affected by his passing perceived him. It didn't hinder his "legend" status, it helped it. That often happens with musicians who die.(Which is why "it's better to burn out than to fade away".) And Kurt affected a generation of music fans. But that doesn't mean he's the last rockstar - and keep in mind that this is coming from a fan.

Throwing my own logic back in my face, Masuka asked if that meant other dead musicians were automatically legends. In some cases yes, and in some cases no.

While The 27 Club (all of the musicians who died at the age of 27) did include many legends, their deaths didn't mean that was the case for all of them. Only some.

Then he asked about Jimi Hendrix. 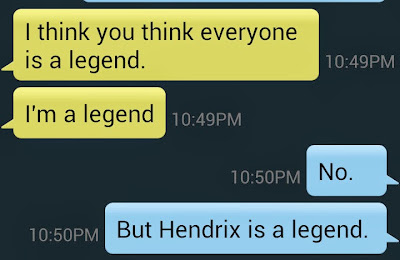 In an effort to further push me into a music fight, he seemed to disagree that Hendrix was a legend. Which, of course, led to expletives and angrily-typed paragraphs on my end. The damn nerve.

But our discussion is worth getting into, at least for me - what makes a musician a rockstar?

And what makes them a legend? 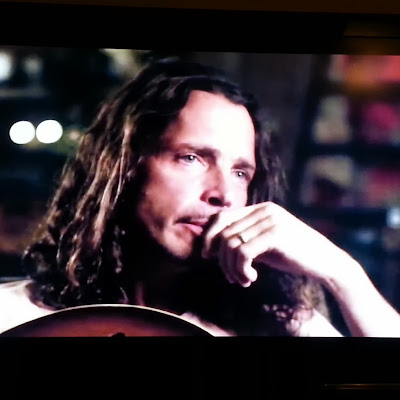 In PJ Twenty, Chris Cornell says "it wasn't later when people surmised that Kurt blowing his head off was the end of the innocence... it didn't, it was that... it was walking into that room". He's taking about walking into the room where Andy Wood was dying.

Andy was the front man for Mother Love Bone - he died of a heroin overdose in 1990. He was definitely a rockstar, and in death his peers considered him a legend. But I'm betting most of you reading this don't know who he is - so does that mean he's not? It seems to all be relative; personal opinion. 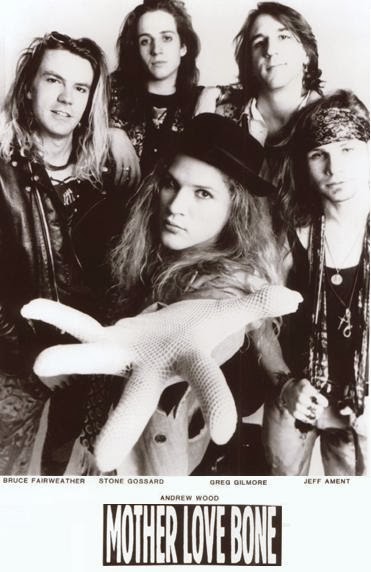 I'm going to use another example from the movie, since it's fresh in my mind (and comes from another Chris Cornell quote). They're talking about Pearl Jam guitarist Mike McCready and his guitar prowess, and Cornell, explaining how impressed he was, says "this guy is a rockstar". And though he's overshadowed by Eddie's frontman popularity, McCready's skills alone would make him a rockstar to his fans.

So what would make him a legend? 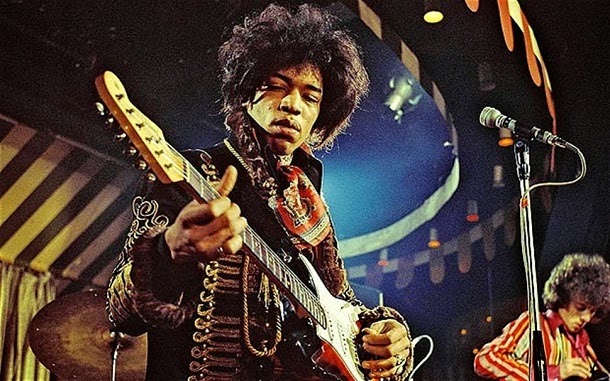 In my opinion, rockstars become legends - or at least they have the opportunity to. It's about longevity, talent, and some intangible, fantastic element that connects them to an audience long after they've played, and then long after they're gone.

And legends? Well, for me that's Page, Plant & the rest of Zeppelin. Stevie Nicks. Stevie Ray Vaughan. Bowie. Leonard Cohen. Neil Young. Clapton. Roger Waters & David Gilmour. Yet another endless list. All the artists who got me stuck on them, and then stuck with me.

I can see already that a few from my rockstar list will make that jump to legend. It's only a matter of time.

But for the sake of argument, I want to know.... what's a rockstar to you?

And what do you think makes a legend?

And If I Had One More Whiskey, Everything Would Have All Slipped Away

Earlier this week I had the chance to be a fly on the wall (ok, so it was a couch) at what can only be described as an intimate living room concert, featuring Hayden, Brendan Canning, and other talented artists. It was the soft launch of  Fat Fat Sounds, a "community based, high-resolution (no MP3 or CDs) not-for-profit record label". 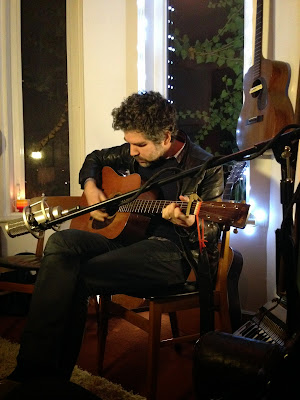 Yes, I've seen Hayden a few times this year. But it's a pretty cool experience, as a fan, to watch a musician sit a couple of feet away from you and play to a small, quiet crowd. Plus two dogs, if we're getting technical.

It has a whole different feel, one I've always loved when it involved friends/boyfriends/random talented strangers playing similarly in my living room or someone else's. 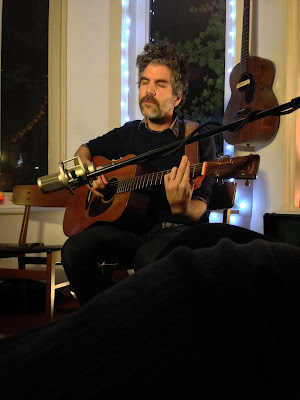 Thanks to Rasam (my music-fan +1 for the evening) for taking some photos & letting me steal them all.

My knee is the unknowing co-star of these pictures. 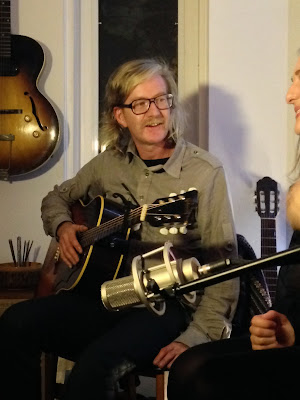 Brendan Canning played a couple of songs off of his new solo album, You Gots 2 Chill.

Like Hayden, I've seen Brendan perform a few times this year as well - with Broken Social Scene at Field Trip, with Edwin Huizenga at The Wooden Sky show, and then here. There's really nothing better than seeing a musician play very different types of shows and venues. It adds even more depth.

Rasam's panoramic shot of the crowd and Noah Mintz as he played a tune to end the night.

(It also made me wonder why I never got my sister's old hHead shirt when I took custody of her band tshirt collection... hmm, sister?) 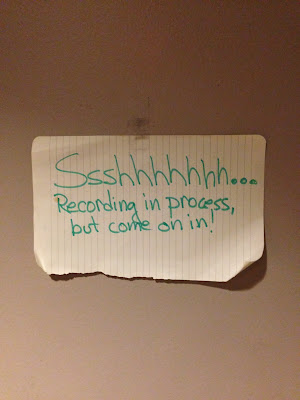 And so, the living room show was over.

Back to my usual living room concerts, which look something like this: 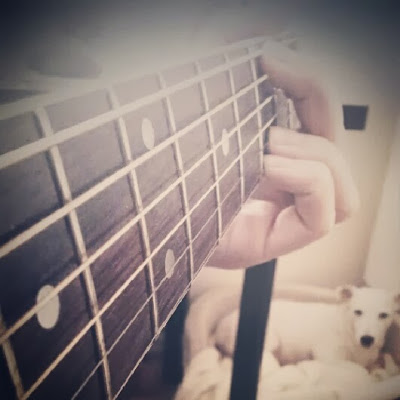 Definitely not the rapt audience I would hope for, nor the talented musician anyone would actually want to hear.

But c'est la vie. Something to work toward, perhaps.Because living room shows are pretty darn rad.

Throat-punched by Kris at 3:12 PM No comments:

If I Met You In A Scissor Fight, I'd Cut Off Both Your Wings On Principle Alone

Well, Halloween is over.

I like to state obvious things, long after the fact. I also like long walks on the beach, dogs that don't bite and singing showtunes to complete strangers. 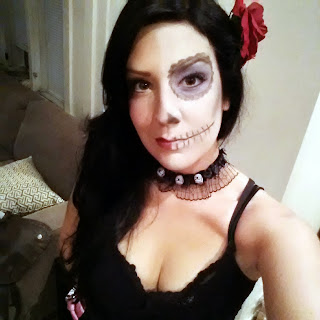 Halloween. Yep. It happened. I was in St. Catharines for the week, and ill-prepared for anything, so I went with the half sugar skull, Dia de Los Muertos kinda thing. Didn't photograph very well. 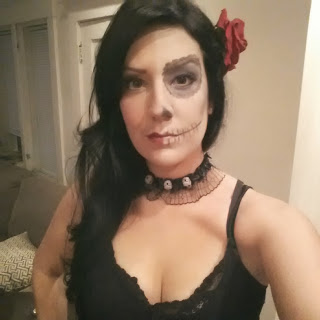 I fear that if I start planning now for an awesome costume next year, I'll have nowhere to wear it. Such non-problems for a chick to have.

But my costume is not nearly as important as some others.

Like, my dog. Who hates wearing anything, ever. And yet we are terrible, evil dog owners and decided to put a pegasus costume on Daisy for all of 10 seconds: 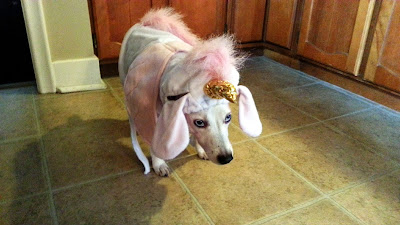 That is the look of hate. I deserve it. 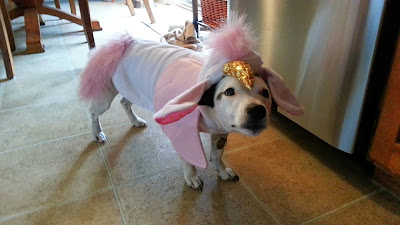 Roxie, on the other hand, was just fine with her pegasus costume. That's because she loves everything. And everyone. And every... ah, you get it.

So Halloween is over, the contest is over, (congrats Serena!), and I'm back in good ol' T.O.

Somehow it's already November, and I'm gearing up for a really busy one work-wise. To start, we (meaning The MediaHaus) will be leading a series of workshops at the North Hill Business Education Centre. The first one starts this month, and is an "Intro to Twitter" course for small business owners and entrepreneurs that don't have the tools or knowledge to effectively get their business started on Twitter.

If that sounds like something you're into, register here.

As for the blog - I took a break from it last week, but I'll have some new bands, new tunes and new stuff to share with you soon. And maybe one day I'll revive the video blog. Maybe.

But for now, I bid you adieu - with help from Zoolander, as he finally nails the underwear trick that cost him the walk-off. 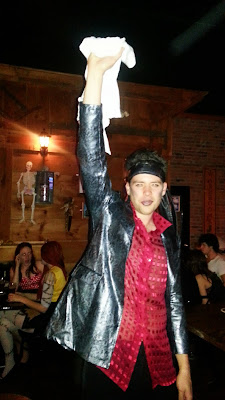 See? People are capable of improvement. One pair of gitch at a time.

(And speaking of improvement - some of us are not so capable. Like our lovely Toronto mayor. But the only comment I'll make on that situation is this: some lyrics in the following song are highly appropriate to our current situation. Step down, Ford.)