I'd Show Them The Stars & The Meaning Of Life, They'd Shut Me Away But I'd Be Alright

As I continue to cook and bake all sorts of random crap, I've been making a conscious (potentially obsessive) effort to find or create healthy versions of whatever I'm making. I love food. It's sad how much I love food, but with my health increasingly being an issue, I started eating a lot better than I used to (what, no more weekly Big Mac meals?! Dammit.) - but I didn't want to give up what I liked to eat, or any food that actually tastes good.

I'm stubborn. So I found ways around it.

I enjoy baking a lot, but sometimes it's pretty eye-opening to learn how much butter and sugar goes into everything. Man, ignorance really was bliss. Delicious, wonderful, artery-clogging bliss. So I've found a few recipes that I now tend to fall back on; baked items that taste like they're full of fat and other yummy garbage... but actually aren't.

Most people likely think banana bread is a pretty healthy option in the "cake" department. And compared to some, it can be. But just because there's bananas in it, doesn't mean it's good for you. Hell no. It should be called "Sugar & Butter Bread - Now With Bananas"!

This chocolate chip banana bread recipe has probably 1/6 the amount of sugar and butter of normal recipes, and it also has flax & yogurt in it. It passed the Family Test at Christmas, so y'know it's a good one.(For this, I make it with all-purpose gluten-free flour from Bulk Barn and use an extra egg white in lieu of xantham gum.Yeah, that sentence was kinda pretentious. I'm awful.)

Here's the recipe. Play around with it, you likely won't screw it up.


Then there's the brownies.

I've always been skeptical of fake brownies. But I once made them out of dates, walnuts and cocoa powder and they were awesome, so I gave my sister's recipe a shot - brownies made with black beans. No flour, and you can use even healthier substitutes than the recipes calls for, if you're so inclined.

These were stupid good. So good that I figured I could trick my chocolate-loving dad into believing they were your run-of-the-mill floury, fatty brownies. (But since he reads this, i guess the jig's up! S'ok, he'll still eat 'em. They're delicious.).

Here's the recipe, from my personal food guru sister.

To make them a bit healthier, I swapped half of the already small amount of butter for coconut oil, and half of the sugar for coconut sugar, which has a lower glycemic index than regular sugar. I also opted not to include walnuts because, well... I had none. That's a pretty good reason.


I dunno what to call them, I don't even think they're actual "things". I came across this on Pinterest, and - though it had literally no instructions at all- decided to throw them together and see how they were. Check out the "recipe" here. (In quotations because it isn't so much a recipe as a list of words thrown together and bolded.)

Turns out, these are great. Healthy, filling, easy. And the chocolate chips make you feel less like you've given up on all things delicious.You can use a lot of different ingredients, whatever you have laying around. I added unsweetened dessicated coconut that I had on-hand, as well as chia seeds. Throw everything in a mixing bowl, mix it (as the aforementioned bowl title suggests), then shape 'em into balls. Put them in the fridge, and you're done.

Balls. Your very own balls.

The last thing I'd like to share is my sister's recipe for granola - I've become sadly addicted to it and make a big batch every week. 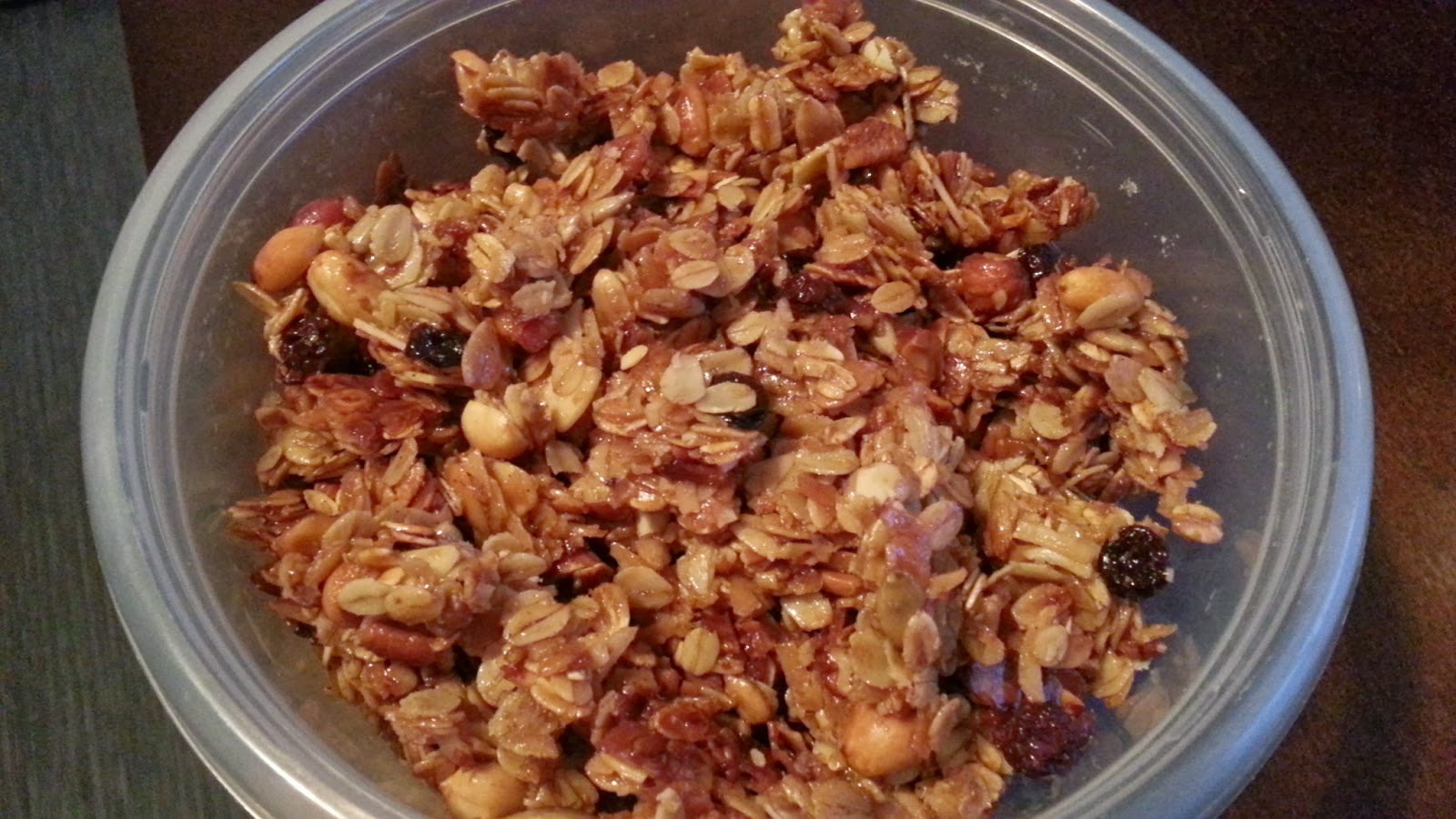 Unfortunately, she hasn't yet posted the recipe on her blog. So you'll just have to keep checking back for that one. You want it. Trust me.

And with that, The Culinary Idiot is now friggin' hungry and must go raid her kitchen for banana bread, fake brownies, nutbar balls and granola.