I Bet Given The Chance You'd Eschew The Divine, & Start A Little Business Selling Contacts Online

Last Thursday kicked off my first-ever JFL42 (thanks to a kickass birthday gift from the seester - thanks Steph!). For the uninitiated, JFL42 is a Just For Laughs comedy festival in Toronto, with a group of headlining acts (Amy Schumer, Nick Offerman, Seth Myers, etc) and 42 other comedians performing at venues throughout the city over 10 days. 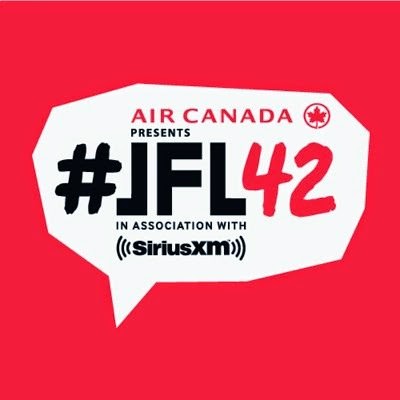 Do the math. It's a lot of comedy. 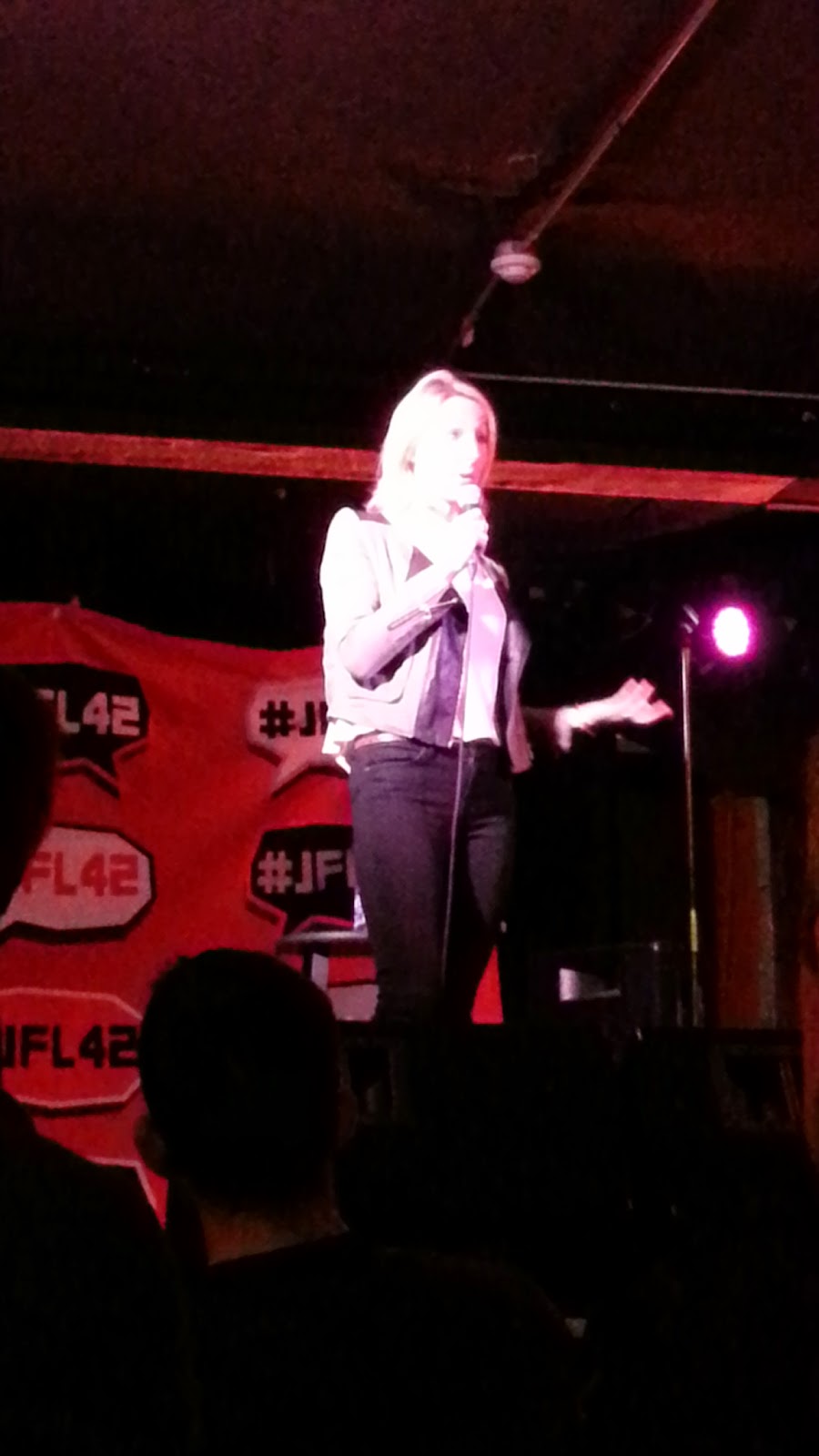 We started on at The Garrison (side note - Oast House beer & tacos go well with stand-up) for Nikki Glaser, then headed to the Queen Elizabeth Theatre to see one of my personal favourites - Tim Minchin. Excuse the shitty pics - just picture a barefoot, tight-pant-donning, eyelined ginger (oops, sorry - only a ginger can call another ginger "ginger".) being absolutely amazing and hilarious both on the piano and off. 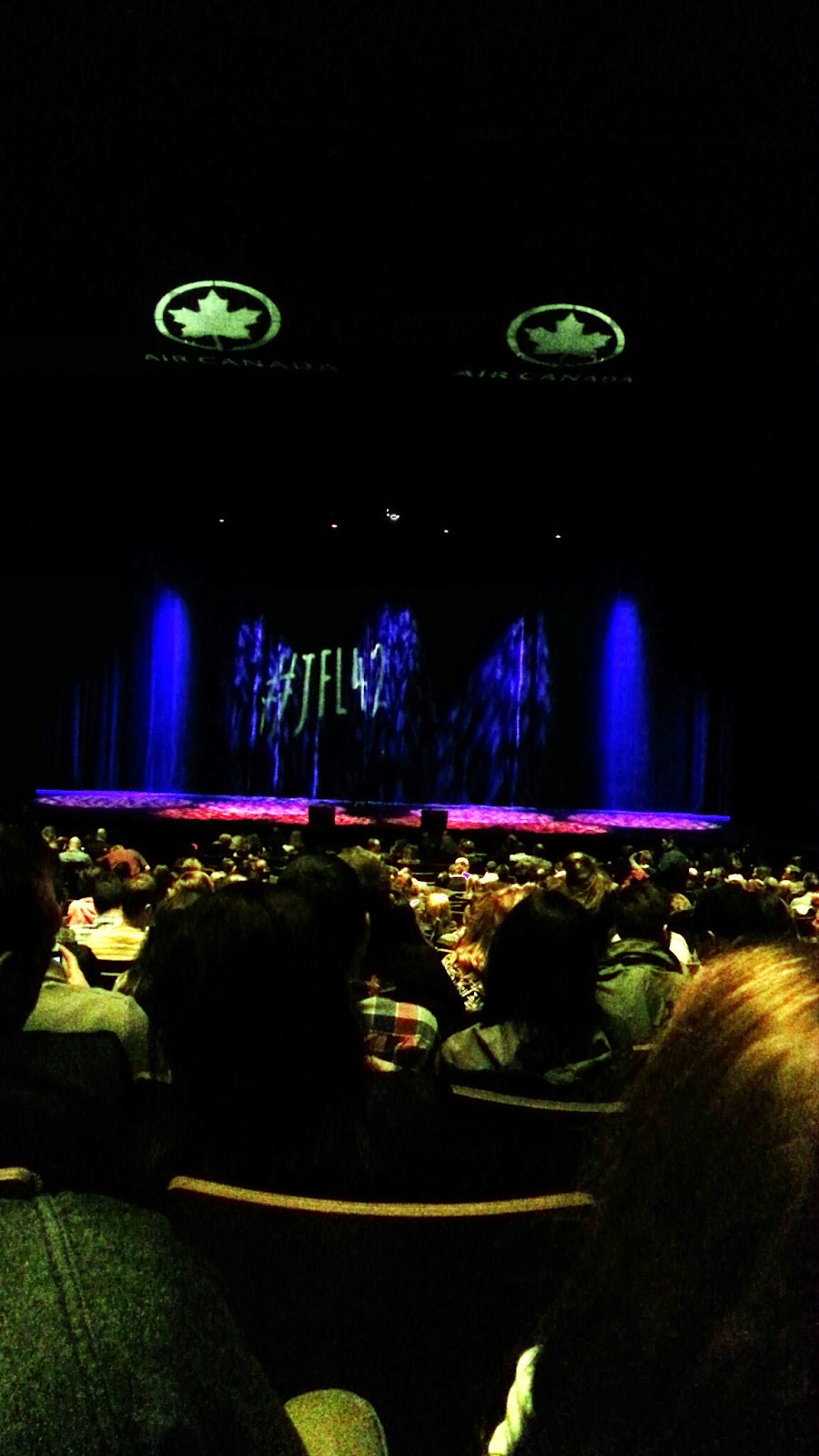 I didn't take photos of any other acts - some didn't allow photography, anyway. But, for your reference, the pic above was the stage at Amy Schumer's show. Gerry Dee was her surprise opener, so that was fun.

Later that night at the Comedy Bar, we saw the New Faces of Comedy - a whole bunch (don't make me count) of Canadian comedians with shorter sets. Some of them were so damn funny, I wouldn't be surprised if they became headliners next year. 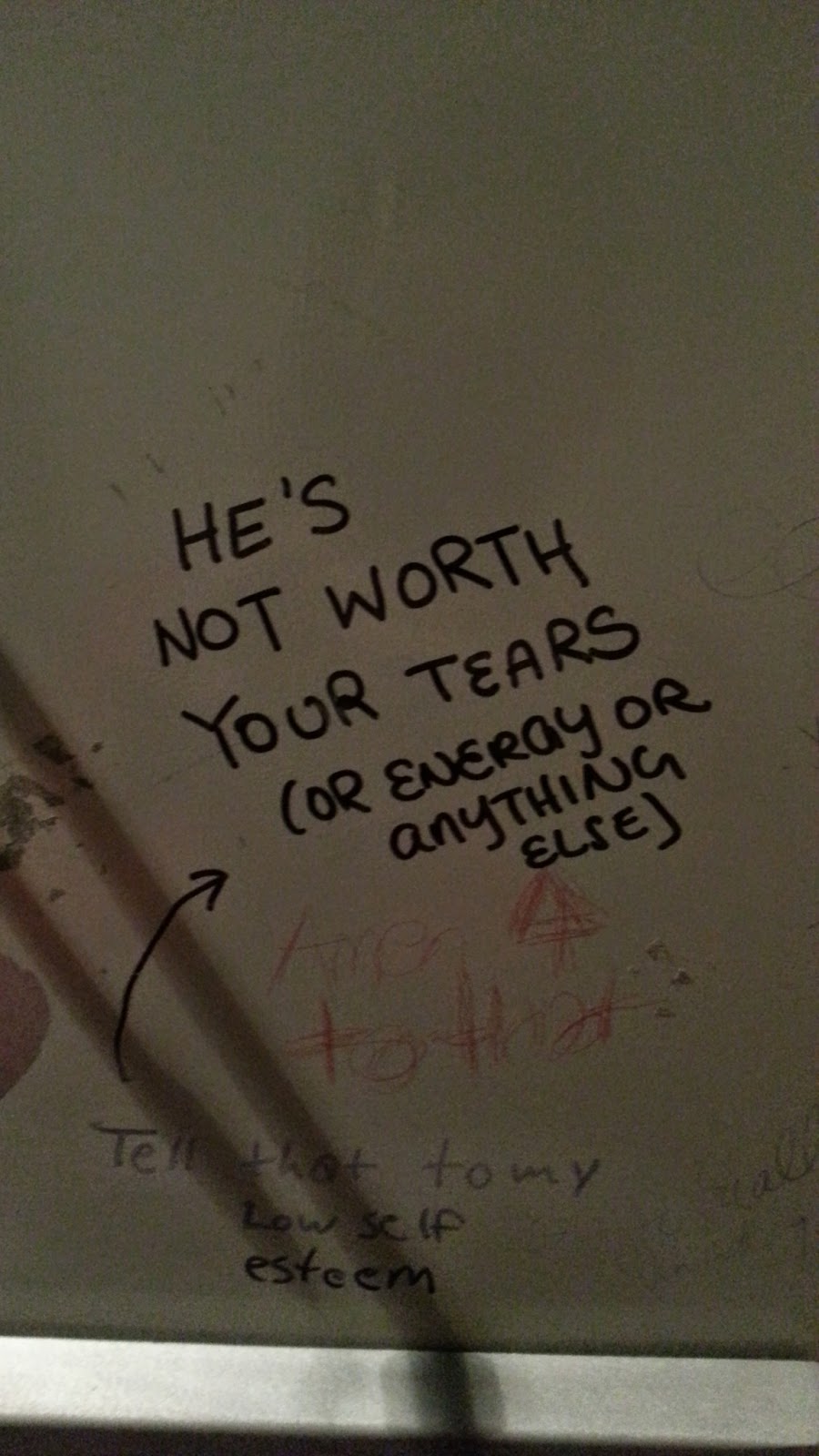 This was written in the bathroom stall at the Comedy Bar.

Ladies, it's a comedy bar! Don't cry about the dude, make jokes about the guy's inability to pick his underwear off the floor and/or the 5 hours a day he spends on the phone with his mom. You'll feel better.


After those shows were Sabrina Jalees, Iliza Schlesinger, Jen Kirkman, Tig Notaro, and Paul F. Tompkins (plus their openers all the New Faces. I'm bad with names, gimme a break.) - all hilarious, and all responsible for potential new stomach muscles. And speaking of laughter, this experience has given me a new theory about the ability to know someone is an asshole based solely on their laugh... but that's a post for another day.

Currently, I'm in Niagara for the Grape and Wine festival and am missing out on the final weekend of JFL. Please, send my love to the Broad City girls. I feel like they 'get' me.

I'll Be Waiting With A Gun & A Pack of Sandwiches

Every once in awhile, I get into that familiar discussion about "deserted island albums". Y'know, when someone asks you to pick the top 5 (or whichever arbitrary number they choose) albums you would bring along if you were deserted on an island. 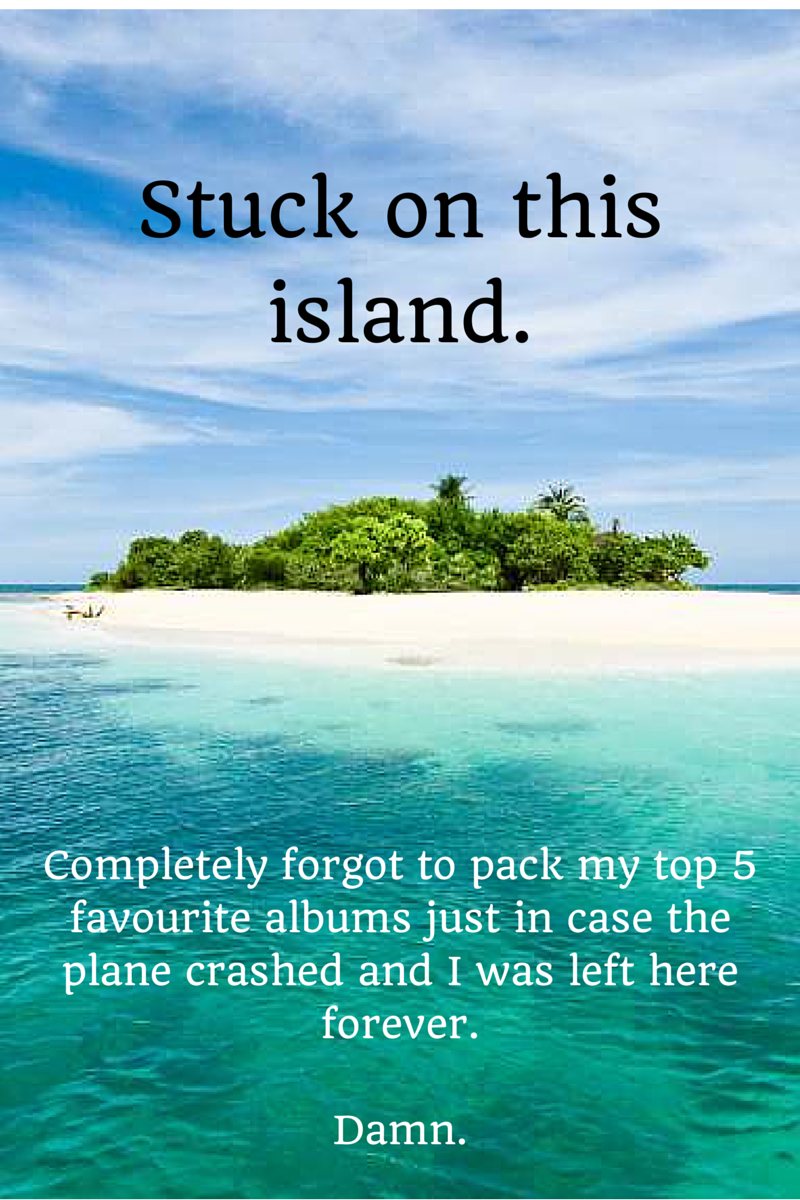 For me, it often becomes an argument that looks something like this:

Excitable Person (henceforth EP): "You HAVE to! Or you'll DIE."

Me: "Pretty sure I won't die in an imaginary situation. And if I was really on a deserted island, then I likely would die due to starvation, dehydration... the albums have nothing to do with it."

EP: "YOU'RE A TERRIBLE PERSON WHO CAN'T PLAY GAMES PROPERLY!"

Yep, it's true. I can't play that game. I refuse. My cop-out answer is that I would make 5 mixed cd's (yes, compact discs) in preparation for impending desertion on an imaginary island. And really, if I had the foresight to pack specific albums because I knew I was going to crash, I would just not board that plane. I watched all 6 seasons of Lost. I know how it works.

When it comes to choosing favourite albums, songs, or artists, it's like choosing a favourite child. Except that while you're choosing said child, you suddenly remember all the other favourite children you've had over the years and have to add them to the list (man, you've been busy). It can't be done. I am of the opinion that any true music obsessor can't whittle down their favourites to a mere few. Sure, I have some select go-to picks that will always be my favourite, but what about the album I can't stop listening to right now? Or the one I loved most when I was 12, but re-visit every year and play over and over for nostalgia's sake? I would need them all.

But maybe I'm alone in this. Judging by other peoples' reactions when I refuse to play this "what if" game, it's entirely possible that I'm just a stubborn jerk and everyone else is fully capable of answering. So I ask you:

If you were about to be stranded on a deserted island (and somehow knew about it in advance, yet still allowed it to happen because you make bad life decisions. I won't judge.), what 5 albums would you bring?

I've read a lot of articles lately about how women shouldn't use the fake "I have a boyfriend" excuse to politely turn down men we're not interested in. The main reason being that it asks the person we're turning down to respect the man we're with, while not respecting us or our own personal decisions (i.e. - simply not wanting to date this person, whether we're single or not.)

I understand that, and I do agree. I'm honest to a fault, lying isn't really my thing. And yet... I know that sometimes I'll still do it when I need to. There are far too many people we all encounter who don't, and won't, take "no" for a final answer. They see it as a challenge, or an opportunity to change our feeble minds. After all, if we're not already taken by other men, surely we must want THIS random guy, right?


The truth is that while most men respect and understand that sometimes we're just not interested, just as they might not be interested in us, there are still guys (and women too, I'm certain) who get too pushy. And in those cases, it can be much easier to just admit defeat, make up a fake significant other, and move on without being bothered further. Because those situations can escalate quickly.

Case in point - last week I was walking the dog around my neighbourhood. Daisy loves all humans to an annoying degree, so she must stop and wait for each of them to pet her before we can move on. And trust me, her brakes are powerful.

There was a guy sitting on the corner with his bike, and Daisy did her usual "I'm stopping so you can give me attention" routine. This guy went nuts over her (it was a bit much), and then told me that I had pretty hair. He started man-handling the dog and throwing her on his lap. I asked him not to do that, as she has a leg injury. He said, "I'm not hurting her! She loves me." and kept fawning over her, saying strange things. When he asked me if she was my boyfriend's dog, where I lived, if I would let him take my picture (hell no), and if I'd go for a drink with him, I knew it was time to grab the dog and move on.

I was polite, I declined and then let him know that Daisy and I needed to keep walking. I called the dog and she started to move away from him, but he grabbed her and held on. "She doesn't want to go, she loves me! You should, too."

I said, "You need to let go of her so she can come with me.", but he wouldn't. He said that he would walk with us so that the dog wouldn't have to leave him. He followed me as I walked, and I asked him not to. Again, being as honest as possible, I told him it made me uncomfortable. So he said, "I'll just walk along with you from the other side of the street and we can still talk and plan our drinks". Y'know, the drinks I had already declined.

When he crossed the street, he asked where I lived again and said it's great that I'm single. Luckily Daisy's creep radar finally kicked in, and she dragged me in the opposite direction. Yup, we ran away.

Moral of this long-winded story? If I hadn't gone the honesty route and just casually mentioned that Daisy belonged to me and my imaginary-yet-super-awesome live-in boyfriend, I could have avoided all of that unnecessary mess and gone about my day. And truthfully, that guy was pretty tame compared to many other stories I could tell. While no one should have to lie about their relationship status in order to make people leave us alone, sometimes it's a necessary evil. And until everyone can take polite rejection in stride, we have to do whatever keeps us safe and un-bothered. For me, that means I'll lie when I need to.

(Although maybe a better lie would be that I'm a killerbitch robot from the future, sent back in time to destroy all men - bet that'd keep them away, too. I'll try it next time.)