You Read The Words & They Sell You Life. They Sell Their Words, But It's All A Lie.

Awhile back, I put together a list of music documentaries that were among my favourites, and many of you chimed in with some of your choices. This time we're tackling the written word, musician-stylez.

I love to read. Always have. I usually have two or three books on the go at once - often one is a heavier, more immersive story, and another is a biography. Music biographies have long been my go-to for learning all the ins and outs of of my favourite musicians (and even some musicians I don't much care for), just to get the real story behind the tunes. Some of these have been eye-opening and amazing. Others have made me dislike the musician (I'm looking at you, Steven Adler).

Because I prefer stories written by the musicians themselves, this particular list is full of autobiographies.They aren't necessarily all my personal favourites, but stories I think are worth a read to music fans. 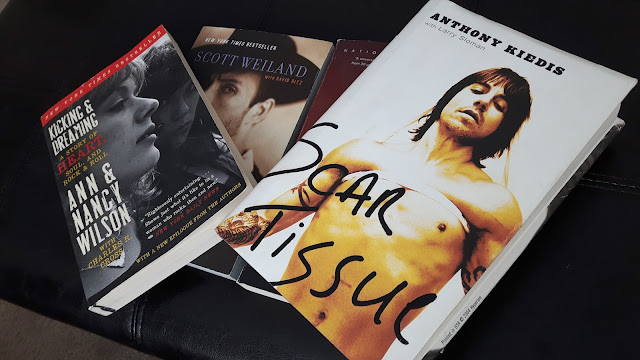 Without further ado, here are some books I think you should read:

Heart - Kicking and Dreaming: Any fan of Heart needs to dive headfirst into this one. Even if you're not a big fan, it's still a great story. It's written by both of the Wilson sisters, and gives an in-depth account of their lives and how they became what they are today. As I often find with biographies, there was just so much I didn't know. Kicking and Dreaming is a book that I'll read, re-read, and always dig.

Anthony Kiedis - Scar Tissue: Every once one awhile I mention this book to someone, and I tend to get one of two reactions. "I love that book!", or "I'm not a Chilli Peppers fan at all. They're awful.". Fair enough. And while I haven't bothered with RHCP past Californication, I'm still a fan of the older albums. But even if I wasn't, I would still enjoy this book. This guy has been through some stuff; most of the stories in these pages seem so unbelievable they couldn't possibly be true, and yet... they are. This is one that explains backstory to a lot of the songs I listened to growing up, and who they were really about. (Spoiler alert - "I Could Have Lied"? About Sinead O'Connor.)

Nikki Sixx - Heroin Diaries / Motley Crue - The Dirt: I put these two books together because I read them around the same time and some of the details have blurred into each other. Heroin Diaries was written by Nikki Sixx himself, while The Dirt was a firsthand account of their time as a band from each of their perspectives. (And before you ask, no - I haven't yet read Tommyland.) I'm a Nikki fan myself, but the sheer number of... let's call 'em hijinks... is pretty astounding for each band member. Heroin Diaries is a little deeper, while The Dirt is, well, dirtier.

Patti Smith - Just Kids: I'll admit, there was a lot I didn't know about Patti Smith before reading this. Truthfully, I didn't know much of anything. But I figured I could stand to learn a bit, and so I read it. I'm glad I did. It's poetic and harsh, and makes me wish I was a fly on the wall at the Chelsea Hotel in the 70's. (It also makes me wish for a doc or film about the Chelsea Hotel, but that's another story.)

Kim Gordon - Girl in a Band: Kim Gordon was always this cool 90's chick that was somehow counter-culture yet not. Her book shows how she got into music, how Sonic Youth happened, and what being in a band was like during the grunge era especially. And, of course, the entirety of her relationship with Thurston Moore. If anything, this book showed that no matter what you think you know about Kim, or any musician, there's always another side of it.

Scott Weiland - Not Dead & Not For Sale: I've been a Stone Temple Pilots fan for a long time. Purple remains one of my favourite albums, for myriad reasons. I didn't know this book existed until I found it at a book store and grabbed it. It wasn't quite what I expected; it was short, a bit all over the place, and didn't read like your usual bio. But it did offer some insight into Scott's head, and his struggle with addiction. Since that struggle ultimately cost him his life this past December, the book itself becomes sadder, and a way to make sense of what he was going through.

Jann Arden - Falling Backwards: I know, this one seems different from the rest of the list. While her music isn't something I play a lot (though "I Would Die For You" is actually one of my favourite songs), it's more Jann's personality that I'm a fan of. I remember back when I worked at ProudFM, she came in for an interview and was so friendly and hilarious. Afterward, she tried to make me and a co-worker skip work to go for patio beers with her. The book she wrote is no different - it has all of her sass and feistiness, and a great story of her life to go along with it.

Slash - Slash: I technically shouldn't have this one on the list. In all honesty, I started reading it a day or two before it was due back at the library. So I've only read 50-60% of it. That said, I'll re-read and finish it eventually and will have wished it was on this list, so there ya go. By all other accounts I've read, it's one of the good ones.

Now, I don't want anyone commenting and telling me that I stupidly forgot this biography or that one - I'm certain that many great books are absent. Maybe some that I haven't read, am planning to read, or didn't like due to my personal tastes. So tell me what musician biographies you'd recommend. I know there are a few I'm looking forward to, such as the one Against Me!'s Laura Jane Grace is putting out.

What others are you looking forward to, or would you recommend to the bookworm music fans like your ol' pal Kris?

Throat-punched by Kris at 11:39 AM No comments: