I Wanna Pull Out Your Crazy, & Pour It Over Me

Those who have been long-time visitors of this site (why?!) may recall a few different posts that I lovingly refer to as the Grammar PSAs from an Asshole. This is where we break down some of the over-used grammar and/or spelling mistakes that are rampant on the ol' internet, and smack folks in the face with some knowledge.

Well, it's been awhile. Too long, maybe. And the incidents are piling up.

So with the help of some friends (shout out to Bill Wellman for his solid list of offenses), it's time for a brand new post. Because only you can prevent forest fires.

I mean... bad grammar on the internet. Right.

"Man, drinking 5 pints then getting on that roller coaster left me really disorientated."

Yes, well... allow me to explain-ate the error of your ways.

The word you're looking for is "disoriented". I can't ever figure out why everyone wants to add an "-ated" to so many words where they don't exist. Save yourself some syllables, you need the energy.

It's not a word. It just isn't. I've said it before, I'm sayin' it again.The word you're probably looking for is "regardless" and yet, once again, people have decided to incorrectly add syllables to create a word that doesn't exist.

Yes, I make up words constantly (and awesomely), but I don't claim that they're real in anyone else's vocabulary. Just mine. But "irregardless" isn't even a made-up word in my weirdo wonked-up world, so let's just make it go away.

In keeping with what seems to be a theme, we have another word that isn't technically a word (though this comic wonderfully explains what you're doing wrong). It's two words, folks. That's right - two. A lot. A. Lot. Repeat it back to me. There you go. Proud of ya.

"I ran over my ex-boyfriend on accident."

Sure, ok. If Accident was the name of the street where you "accidentally" ran over the guy. Maybe.

First of all, that wasn't an accident. And secondly, nothing is on accident. Unless "accident" is an actual thing that you can place other items upon, like the aforementioned fictional Accident Street, you really mean by accident. If it was accidental, it happened by accident. Except in the case of running over your ex-boyfriend, that's just because you're bitter and have a license. S'ok. I get it.

(Sidenote: I realize that "on accident" has become an accepted conversational version among young people. But I'll never be cool with it. Can't. Won't.) 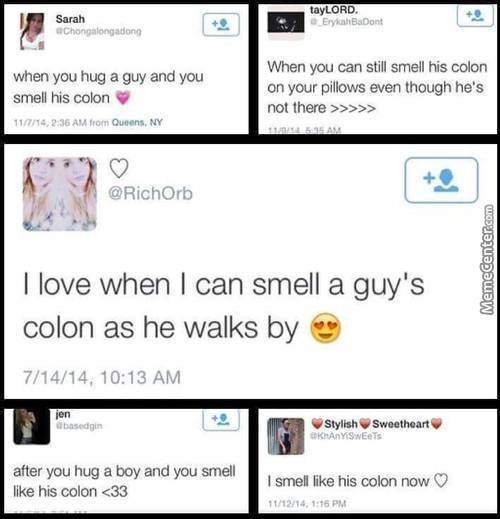 See graphic above. It's real, people. These girls actually posted that.

This one might be my favourite, and I truly must thank the internet for bringing it to my attention. Where to begin here? Since the offenders appear to be younger women, I'll try to be nice. Ladies... the word you're looking for is cologne. I know, the spelling is confusing. But I promise, it's correct. A dude's colon, on the other hand, is not what you want your pillows to smell like.

I mean, I'm not trying to judge. Maybe you really are just that into your boyfriend's colon. If that's the case, I take it back. Go on with your colon-loving ways, chick.

"Whose coming to my house to drink wine until we cry?"

"I'd rather eat a burger then a person."

Your appetite is admirable. Right after a burger, I'd think a person would be too filling. That's just me, though.

I put these together because I know they can be tricky, and in a similar way.

Then normally indicates time, or a series of events. Than is used with comparisons. "I'd rather punch myself in the face then throw myself off a bridge than ever have to hear that song again."

As usual, continue to send me your Grammar Asshole judgements. They amuse me, and you know I'll eventually have to do another one of these as the internet continues to make us dumber, lazier, and way more disorientated, irregardless of what we do on accident.

Throat-punched by Kris at 11:52 AM No comments:

I Sell Souls At The Side Of The Road, Would You Like To Take A Number?

Remember when I used to do a weekly post about new music, my favourite albums, or concert reviews? Remember?! Nah, you don't remember.

Well I did. And it's about time I brought it back, for the good of the children.

Today girls and boys, we're adding to the Favourite Albums list. And to this very specific list we're adding an album from a band that includes a badass chick that I'm kinda sorta maybe a little in love with. The woman? Brody Dalle. The band? The Distillers. And that album, my dear friends, is Coral Fang. 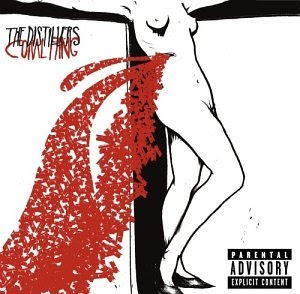 While there are other Distillers albums that I could list here, there's always been something about Coral Fang. From the first note on the first song ("Drain the Blood"), I'm immediately put into a 201.45% better mood, ready to get things done. Your boss is a jerk? Put on this album. Your boyfriend called you fat? Put on this album. You have that ever-so-slight urge to go batshit crazy and slap everyone in the face? Put. On. This. Album. I mean it.

I was late to the game when it came to this band. Coral Fang was my introduction, and though it came out in 2003 it wasn't on my radar until somewhere around 2005. A couple of their singles - "City of Angels" and "The Hunger", respectively - were songs that I adored, but for some reason I hadn't done the normal-person thing and gone out to buy this album. But when I finally did, I was hooked. Brody kicked my ass.

I remember driving around in my old Protege (Marcellus Wallace, RIP), falling hard for every song on this album. Anyone I drove had to put up with Coral Fang on loop or get out. I had found my new idol. My rock chick goddess who exemplified so much of what I wish I was.

While there's a lot of punk drive and fast riffs throughout this record, they threw in just enough slower melodic elements to make it interesting. And no one sounds quite like Brody. You can literally hear her scowl as she's singing, with a voice that is her own blend of gritty and raw, yet feminine. Many of these songs are about her relationship / break-up with ex-husband Tim Armstrong of Rancid (before she married Josh Homme and became one half of my favourite couple ever), with a lot of the lyrics giving a massive middle finger to the general public - but then you've got a song like "For Tonight You're Only Here To Know", and suddenly your cold black heart just might feel some feelings. A good example of how this album can switch tactics on a dime would be "The Hunger"; from slow tempoed verses to a sudden heavier turn and that typical Brody scream, it becomes a completely different song. An ex once heard it and said, "That was such a nice song, why did she start screaming and ruin it?"

So many years later, I've never tired of Coral Fang. I still listen to songs from this album almost daily, and still get as amped by it as I did when I was 22. It's been a staple for over a decade, one part of the soundtrack to my adult years, my breakups, make ups, good weeks, and crappy days.

I'll be screaming these tunes along with Brody until I'm 85 and forget the words. And even then, I'll still want to be her.