Sinatra Was Swinging, All The Drunks They Were Singing

Well, it's that time again.

The time of year that I post pretty much the same exact thing every single Christmas without fail. A brief holiday message. A picture, likely of the dog or a tree (or the dog by the tree, when I want to get really crazy and blow your minds). And then, as always, a video - Fairytale of New York by the Pogues. Every. Single. Year.

I'm predictable. Or reliable. Or maybe boring. But really, just big on traditions when it comes to Christmas.


I love Christmas. And while last week's surgery has kept me from really getting Christmas crazy, I've been doing my best. I managed some baking, wrapped presents horribly, and have attempted to schedule my pain pills to hopefully allow for holiday imbibing.

What's more Christmas-y than that? 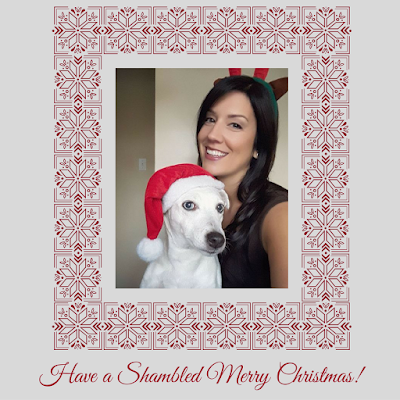 I'm not a fan of winter. I don't care about snow. I love to hibernate and avoid human contact. And yet, when the holidays roll around that all changes. I can handle the cold briefly, I love a white Christmas, and I want to get out and see all of my favourite people. That's not just the codeine talking (though painkillers are making this Christmas merrier, surely), but the season turns your favourite surly rambler into a cheerful little weirdo.

So whatever you celebrate (or don't celebrate), I hope it's a good one. From me and the pigdog Santa - happy holidays, everyone!

Throat-punched by Kris at 11:36 AM No comments:

When She Left, I Had Only Begun This Lullaby

Years ago, when I was first diagnosed with Graves' disease (and all the other fun health problems the docs found), I had every intention of blogging more about it. Because the one time I did, I received messages from women who also had Graves' and were looking for places online to read about experiences with it. I wanted to give them that.

But, for one reason or another, I never did.

Well, years have passed and after switching to a new endocrinologist, the decision has been made to cut out the ol' jerk thyroid. As far as I know, this doesn't actually get rid of the Graves' disease, but it should lessen the symptoms. And the symptoms are no fun. Hair loss, crazy weight fluctuations, temperature sensitivity (Too hot! Too cold!), extra anxiety on top of my anxiety disorder, stomach problems on top of my actual stomach problems, RAOR (Random Acts of Rage), insomnia, eye pain... the list goes on.

It pretty much turns you into an angry pile of confusing painful garbage.

The idea of feeling better, even if only slightly, sounds good to me. But since I've never had surgery before, I'm not entirely looking forward to it. Sharp tools at my throat? Ugh. But it's gotta be done. And so I thought that maybe my thyroid - who I've named Thelma, because I must name all things - deserved a proper goodbye. She was kind of an asshole, but now I'm killing her. A small tribute seems only right.

So, to say adios, I've added a few photos of some moments Thelma and I have shared together through the years. 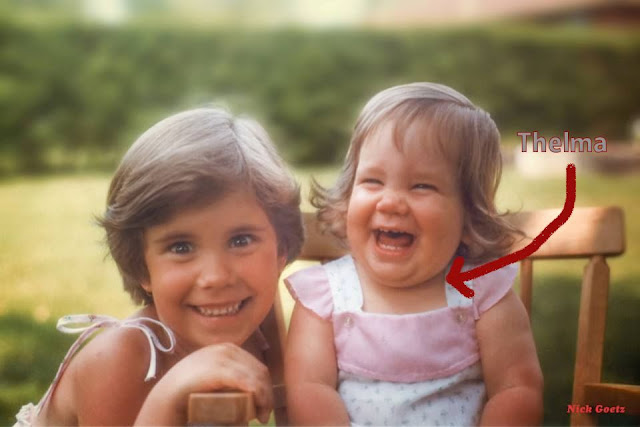 Somewhere under the infinite fat rolls of my baby chin(s), Thelma lives in fear of suffocation. Sorry, Thelma. Now I understand why you turned evil.

And here we are with Thelma in the late 80's.

See how my sister is laughing at her? Funny girl, that Thelma. 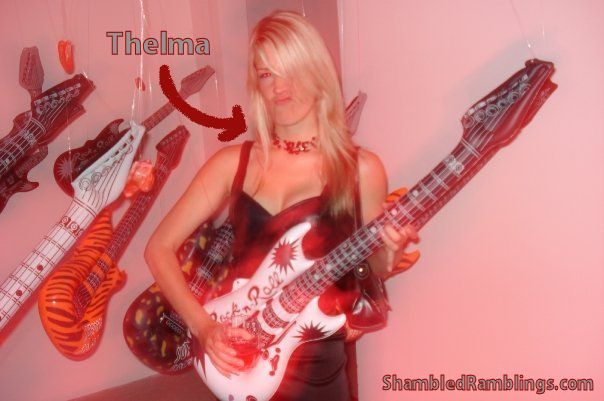 Thelma was embarrassed, and does not endorse anything happening in this picture.

Neither does anyone else.

Thelma with Leah eight years ago at my sister's wedding.

Here's Thelma a few months ago, meeting my little buddy when he was brand new.

So there ya go. That's Thelma through the years.

Tomorrow, Thelma will be put to rest. And though I never thought twice about her until a few years ago, apparently thyroids are "important" and "regulate stuff or whatever". If you haven't yet, be sure to get yours examined by your doctor. A simple blood test can let them know if your thyroid is functioning properly, or if you've got a psycho Thelma to contend with. Sometimes thyroids have just got to go.