As My World Comes Crashing Down I'll Be Dancing, Freaking Out.

Most days I take Daisy for a long walk by the lake. The other day I was doing just that, when I saw two women speed walking toward me. So I say hello as I usually do (we're typically a friendly bunch around here), and smile at them as they walk by.

But the closest woman shoots me a disgusted look as though I just screamed profanities and threatened to steal her firstborn child. As they passed, she loudly whispered bitchily to her friend, "She should really keep that covered in public." 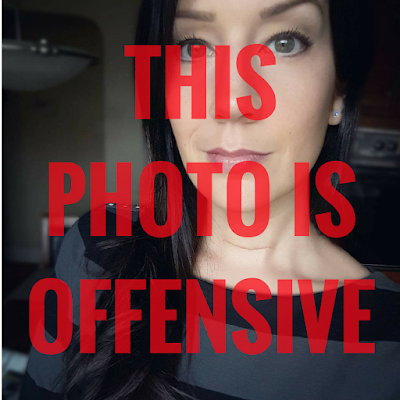 At first I thought she was referring to my tattoo, for some odd reason. Though it's on my shoulder/back, one of the roses peeks through the top of my shirt sometimes. But no. There's no way she could see that, plus they're flowers. Hardly offensive.

So what else could she be talking about?

I checked out my clothes. I wasn't wearing any of my band tshirts, so no zombies or questionable graphics and words to worry about. Jeans and a plain grey shirt were hardly offensive. All of my body parts were covered. Nothing on display.

I just couldn't figure out what had made her react that way; what offended her so badly that she would make her disgust public.

Then I realized... she was talking about my scar.

In December I had surgery to get my thyroid removed, so I now have a small red scar across my throat. Before and right after the surgery, I was already extremely self-conscious about it. So much so, I didn't even want the bandages to come off because I was scared of having to look at it in the mirror everyday. And also because of reactions like this lady's - I didn't want people to be disgusted when they saw me. I knew it would look like my throat had been slit open, because... well, it had been.


But in the end, the scar isn't nearly as bad as I anticipated. It's pretty small. Once it's actually healed, I doubt it will be all that noticeable.

A lot of the time I forget it's even there, aside from the residual pain as it heals. When I go out, I'll still often cover it up with a choker or scarf (even though that causes further soreness). But lately I've been covering it less, because I care less. Friends have told me to display the scar, like it's a point of pride. I've gotten a few weird looks here and there, but never this reaction. Never this open disgust.

You may be wondering why I bothered blogging about this. I suppose it's because I want to be reassured that this woman was the exception, and not the rule. That the average person wouldn't be so judgemental over something insignificant. This was her response to a small thyroid surgery scar - not a hugely visible blight, in the grand scheme of things. So would she be nastier to those who have been through really serious procedures? To those with scars that can't be easily hidden?

It bothered me most because it came from another female. It felt they way it does when women openly judge other women for their clothes, their bodies, and their personal choices. Hey chick, lighten up! I had surgery, I didn't do this to myself as a fashion statement. I fully support your bright speed walking outfit, can you not support my choice to surgically remove something related to my illness?

Then again, maybe I'm wrong. Maybe she wasn't reacting to my scar at all.

It might've just been my face that upset her. Sorry 'bout that, Judgy Speedwalker Lady. We're cool.

Throat-punched by Kris at 1:08 PM No comments: